For those of you that know me, (Lp) know that I am not the one who normally writes our Blog Posts for social media or the website. However, this time you will be hearing a lot from me over the next two weeks. Matter fact if I can even get these posts written without tears on my keyboard it will be a miracle. Let me warn you this first post will be LONG, but I promise it is worth the read.

In case you have not heard yet, the Brunswick County’s All-Star Ponytails team is headed to the World Series in Sulphur Springs, Texas August 2-7, 2019. Let me say that again for the ones in the back. BRUNSWICK COUNTY FASTPITCH SOFTBALL HAS DONE IT AGAIN AND ARE HEADED TO THE WORLD SERIES!!!! The South Brunswick Ponytail X Play 12U is a team made up of girls from both Town Creek and Southport.

Some of you may be wondering why I am so involved or dedicated to this team. Wellllllll let me explain. 19 years ago there were 11 girls and 3 coaches that became my family and will forever be apart of my life in more ways than one. We took a ride that one can never forget. One that most don’t ever get the opportunity to experience. A ride like no other. That ride was a trip to the 2000 Fastpitch Dixie Belles World Series. This  team from a country town called Winnabow, NC that no one had ever heard of. To my knowledge we are the last and only fastpitch softball team from Town Creek to go ALL THE WAY! So you can imagine when I heard the news (from my teammate, “Crush” and a friend of mine whose daughter plays) that “South Brunswick” was once again the 2019 District IX Champs..oh hunny I cancelled work and got my butt down to Town Creek park where the State tournament was to begin the next day. My Teammates, Megan “Crush” (outfielder/3rd base)  (who also has a daughter Lexi on this team), Candice “Frog” (1st baseman and favvv lefty because boyyy could we pick some girls off), Brandi “Grasshoppa”  (shortstop) Johanna “Hanna”  (pitcher and outfield) , Jade (pitcher and also the pitching/hitting coach for the 2019 team) and Tanika “Nika” (3rd baseman/2nd base and 1st base ..yes she is an athlete) joined me at Town Creek Park on Saturday July 9th to cheer on the next group of gals from both Town Creek and Southport that could take the NC title once again. In the meantime we had a facebook group chat keeping all of our 2000 teammates in the loop. (Brittany, Rachel, Ashley, Kendra, Holly)    We were a bit older, we were the 15U group, but age doesn’t matter, what matters is they are from our same town/same park where we grew up playing and they are outstanding athletes so they needed our support.

Hold on to your seats y’all this is the exciting part….

Here we go first game up against West Chatham. This was actually the first game I have seen these girls play together and let me tell you if you have not seen them play boyyyyyy they are good! They are dag on GOOD! I knew right then we were going all the way. (If you don’t believe me ask my momma what I told her that night)  South Brunswick Won and gave West Chatham there first loss. Score 11-4

Next up Leland  ( I love ya LA) but my girls did work in this game. Leland had a bye the first game so the girls knew they had to work hard for this one. They were hitting base hits and working that mound like you wouldn’t believe. They gave Leland their first loss that day. Score 9-7

By Monday, the rain and storms had set in and was making it challenging for everyone on and off the field. Every game was cancelled. South Brunswick’s game was against Cape Fear and rescheduled for Tuesday at 1:00. The girls got started, but mother nature had other plans and around 2:30 they sent the teams to their vehicles to wait out the storm. At approx 3:30pm they made the call to postpone until 6:00pm. The girls were currently tied up 10-10 in the bottom of the 6th inning and runners on 2nd and 3rd.  They came back at 6:00pm after being on the rain delay and by the time I got back to the field Cape Fear had more runs on the board. S.B. was up to bat and scored winning the game 13-12. They were already behind schedule because of so many delays so they started the very next game against West Chatham and it was MESSY. Pouring down rain and the girls from West Chatham were on fire with their bats. Hitting every gap they could find. Umpires finally called it after the 2nd Inning and would postpone the game until the following morning at 9am. Well W.C. had 4 runs and honestly I was so soaked I can’t remember what S.B. had, but I knew for sure the girls would come back the next morning with their mind right and ready to send them home. That was NOT the case. They took a loss and the very first loss all season (like CHAMPS do sometimes) 18-6

Y’all ….THIS….is where it gets good! Ya know if you have ever been on the ball field and you, yourself are a baller, no matter what, a loss always brings tears to your eyes because it is emotional. That moment was emotional for these girls. They knew at that time, that this left 3 teams with one loss each. South Brunswick, West Chatham and Cape Fear.

What happened next is going to tell it all. S.B.  lost the coin flip which meant W.C. got the bye and S.B. yet again was playing a back-to-back game. Folks listen, they also knew in the back of their minds if they were to beat Cape Fear they were back up against the team that just gave them their only loss. Can you imagine? Potentially this could be 3 games back-to-back in the hottest of temperatures. Next thing I know the girls (S.B.) are in the dugout, in a huddle, getting HYPE! HYPEEEEEE! Cheering, yelling, I mean doing everything they can to pick up each other and get their game face ON! That’s just what they did too. They came back and they came back STRONG! Beating Cape Fear 7-2 and moving on to the Championship game against W.C. I watched the Parents, Grandparents and friends of the girls literally biting their nails for what was about to happen. The team was HYPE, the coaches were HYPE and  the stands were….. welllll we were just plain nervous and pacing. Everyone wanted this title for them. The S.B. girls for the first time in the tournament got the coin flip for Home Team, but let me tell you right now it wouldn’t have mattered either way because the girls took the field and had 3 up 3 down in a matter of minutes. Thennnn they came out swinging for the fence…think Im kidding. These girls can hit and you best be on the fence ready! There was no stopping them now. Batter after batter on the bags and scoring runs. Defense doing work in the field. Pitcher literally ON FIRE on the mound throwing strike after strike. Y’all S.B. scored 11-1 in the 4th Inning. Let me break that on down for ya….that would be called the run rule! Oh yeaaaaa they WON THE NORTH CAROLINA TITLE OF STATE CHAMPIONS for their age group.

As a spectator it just doesn’t get any better than being on the edge of your seat and swinggggg …yessir she has connected again or right field just caught the most beautiful catch you have ever seen, but as a ball player this is LIFE!

Everything you have worked for is happening right in front of your eyes as you watch your teammate go yard or you, yourself make the biggest play of the game. We’re talking months of practice, months of missing out on all the summer fun your friends are having, tears–LOTS of them,  because sometimes even the best of the best have those off days, but most importantly months of making a memory with the girls who will now be your family forever.

Without further ado,  Let me introduce to you the 2019 North Carolina State Champion 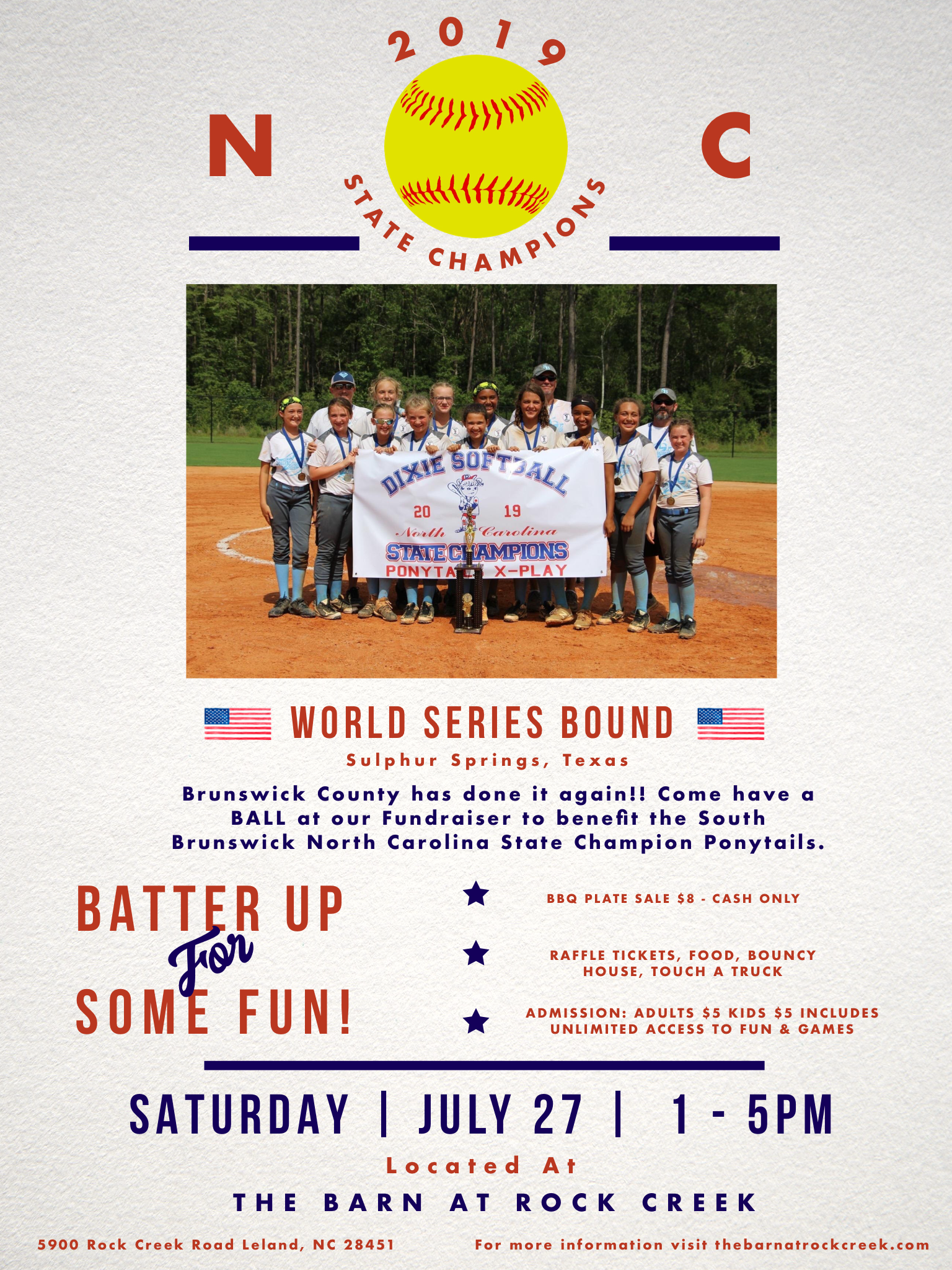 Please come out and support our local athletes and their incredible performance on the ballfield!

The Barn at Rock Creek

All ages are welcome and BBQ plates will be for sale during the event.

We will be selling raffle tickets

They Are More Than Just Fathers!
Softball is LIFE…Part 2!

🤍 HAPPY ANNIVERSARY 🤍 I was looking throug

“Then two became one.” Congratulations to th